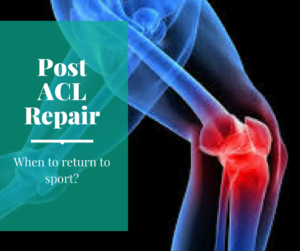 Returning to sport too soon after having an ACL repair gives a much higher chance or re-rupturing the graft, but when is the best time to return to sport? Recent research shows

2: time is key! the earlier you return to sport less than 9months after the repair, the more likely you are to re-injure it.

A bit more on the studies for those geeks: